Christians Flock to Jerusalem – For Feast of the Tabernacles 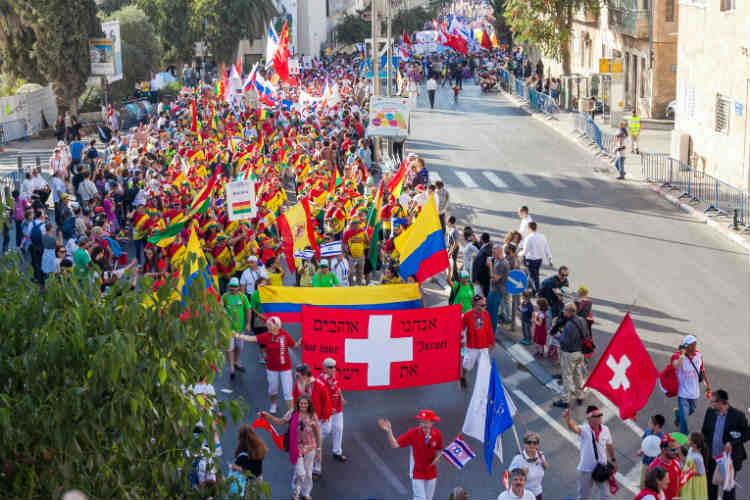 While Jews around the world celebrate each year in October Sukkot – the biblical Feast of Tabernacles – it is no less a meaningful holiday for many Christians. Every year, thousands of Christians from all over the world – including South Africa – visit Jerusalem to celebrate the Feast of Tabernacles and to show their support for Israel. As Vere Catan from Singapore told CBN News at last year’s celebrations “I am honored to support Israel on behalf of my country. Israel has been a close ally of Singapore since the beginning and we owe Israel so much. They helped us when we were nothing. Israel was the one who helped us. ”

Parading through the streets of Jerusalem – dressed in colourful, traditional costumes from their home countries – many believe the Feast of the Tabernacles will one day fulfill its prophetic meaning. International Christian Embassy Jerusalem Media Director David Parsons explains the significance of Sukkot.

“The prophet Zechariah said one day all the nations would come to worship the Lord and keep the Feast of Tabernacles in Jerusalem (Zechariah 14). You’re not only remembering God’s provision in the wilderness at this Feast but you’re looking forward to the Messianic Kingdom.”

As one visitor remarked “this is a true United Nations, not that farce in New York City, that ignores the butchery and massacres all over the world and demeans and insults the country of the Children of Israel. I was here a few years ago and now again this year. We are over 6,000 Christians from almost 100 countries taking part in this October 2017 Feast of Tabernacles celebration.”

Sponsored by the International Christian Embassy Jerusalem, the celebrations ran from 6 – 11 October. “It was one of our biggest crowds ever at this year’s Feast,” said ICEJ President Dr. Jürgen Bühler.
The 38th annual Feast gathering kicked off on Friday night, 6 October with an outdoor meal and concert at the Ein Gedi oasis, along the shores of the Dead Sea. The festival then moved up to Jerusalem for the rest of the week of Sukkot, with most events held at the Jerusalem Pais Arena. Other highlights included the popular Jerusalem March through the streets of the capital, special tours to such sites as the ancient City of David, and a concluding Prayer Vigil at the historic Tower of David inside the walled Old City.

For the South African pilgrims, they would have noticed on the way to the Tower of David, after entering though the ancient Jaffa Gate, a beautifully crafted ceramic plaque that reads: 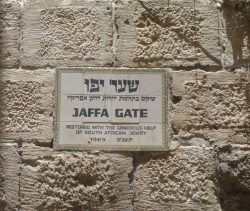 Restored by the generous help of South African Jewry

Over the past four decades, the Christian celebration of Sukkot has impacted on hundreds of thousands of Christians and Jews alike. Multitudes of Feast pilgrims have been enriched by the colourful worship experience and by their encounters with both ancient and modern Israel.

Israel at the time was facing a mega-media assault on the sovereignty of its capital – Jerusalem.

If anything, the “War of Words” has intensified.

On this year’s Israel’s Day of Independence (Yom HaAtzmaut) in May 2 2017, the United Nation’s cultural body, UNESCO – which both the USA and Israel hinted at withdrawing at the end of 2018  due to its anti-Israel bias – passed a series of resolutions denying Israeli claims to Jerusalem. Jewish connection to biblical holy sites that goes back thousands of years before the arrival of the armies of Islam, were expunged by fiendish UN resolutions. 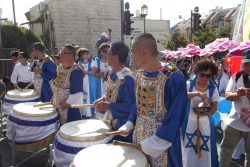 Given that the issue of Jerusalem had once again come to the fore, this year’s Feast of the Tabernacles was also dedicated to reaffirming Christian support for Jerusalem as the sovereign capital of the Jewish People.

Among the Feast participants were some 30 national and state parliamentarians from around the globe affiliated with the Israel Allies Foundation who came this past Sukkot to stand in solidarity with Israel and the Jewish people.

Israel might be the Jewish homeland, but the Christian faith has remained tied to the Holy Land for over 2000 years. Thanks to Jesus, it’s a bond that will never be broken. For Christian pilgrims, the Holy Land is a treasure chest of sites all worth visiting.

Apart from Jerusalem and of course Bethlehem, the birthplace of Jesus, many of the pilgrims visited:

Qasr el Yahud, where John the Baptist baptized Jesus; Nazareth, the childhood home of Jesus, and today home to the largest Christian church in the Middle East; The Jesus Trail, a hiking trail that follows in Jesus’ footsteps in the Galilee; Capernaum, “The town of Jesus”, where several churches and a museum celebrate the life and teachings of Jesus; the Mount of Beatitudes, the home to ‘The Sermon on the Mount’ and a tranquil oasis overlooking the Sea of Galilee; Tabgha, the legendary site of the feeding of the five thousand (with five loaves and two fish), celebrated today by the Church of the Multiplication; St. George’s Monastery, the stunning cliff-hugging monastery (one of the world’s oldest) in the heart of the Judean desert, and Bethsaida, home to the three Apostles – Peter, Andrew and Philip – and a number of miracles by Jesus. 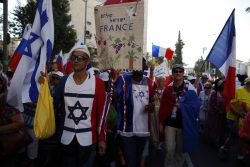 According to Bühler, this year also held an “added attraction of celebrating the fifty-year Jubilee of a reunited Jerusalem,” following Israel’s victory in the 1967 Six-Day War. “This means we are truly in for a banner Feast,” Bühler had said in a statement before the pilgrims arrived.

By all accounts, the festivities lived up to expectation, and the participants returned to their countries from all over the world inspired and enriched by their experience. 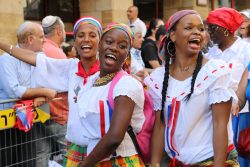 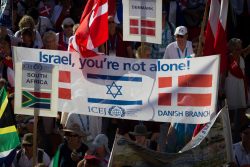